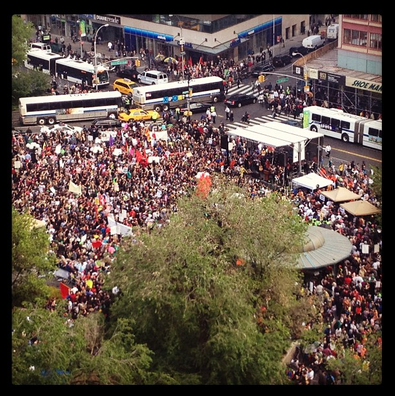 1. It names the source of the crisis.
Political insiders have avoided this simple reality: The problems of the 99% are caused in large part by Wall Street greed, perverse financial incentives, and a corporate takeover of the political system. Now that this is understood, the genie is out of the bottle and it can’t be put back in.

2. It provides a clear vision of the world we want.
We can create a world that works for everyone, not just the wealthiest 1%. And we, the 99%, are using the spaces opened up by the Occupy movement to conduct a dialogue about the world we want.

3. It sets a new standard for public debate.
Those advocating policies and proposals must now demonstrate that their ideas will benefit the 99%. Serving only the 1% will not suffice, nor will claims that the subsidies and policies that benefit the 1% will eventually “trickle down.”

4. It presents a new narrative.
The solution is not to starve government or impose harsh austerity measures that further harm middle-class and poor people already reeling from a bad economy. Instead, the solution is to free society and government from corporate dominance. A functioning democracy is our best shot at addressing critical social, environmental, and economic crises.

5. It creates a big tent.
We, the 99%, are people of all ages, races, occupations, and political beliefs. We will resist being divided or marginalized. We are learning to work together with respect.

6. It offers everyone a chance to create change.
No one is in charge; no organization or political party calls the shots. Anyone can get involved, offer proposals, support the occupations, and build the movement. Because leadership is everywhere and new supporters keep turning up, there is a flowering of creativity and a resilience that makes the movement nearly impossible to shut down.

7. It is a movement, not a list of demands.
The call for deep change—not temporary fixes and single-issue reforms—is the movement’s sustaining power. The movement is sometimes criticized for failing to issue a list of demands, but doing so could keep it tied to status quo power relationships and policy options. The occupiers and their supporters will not be boxed in.

8. It combines the local and the global.
People in cities and towns around the world are setting their own local agendas, tactics, and aims. What they share in common is a critique of corporate power and an identification with the 99%, creating an extraordinary wave of global solidarity.

9. It offers an ethic and practice of deep democracy and community.
Slow, patient decision-making in which every voice is heard translates into wisdom, common commitment, and power. Occupy sites are set up as communities in which anyone can discuss grievances, hopes, and dreams, and where all can experiment with living in a space built around mutual support.

10. We have reclaimed our power.
Instead of looking to politicians and leaders to bring about change, we can see now that the power rests with us. Instead of being victims to the forces upending our lives, we are claiming our sovereign right to remake the world.

Occupy Wall Street contains the seeds of its own demise. It is not going to be a happy ending, like the transformation of the Tea Party into a powerful wing of the Republican Party, but a sputtering out that will leave the movement’s allies with a feeling of distaste... the flaw is not in the way the idea is being handled but in the very concept of occupation itself.

For some, the sole purpose of this protest is to make their feelings heard about income inequality. These people may show up for a day and say hello, or express sympathy from the comfort of their suburban Massachusetts homes, but they will not make the movement any more powerful. For the core of believers, the draw is that this protest is different from anything that came before it: it is not one day’s march through New York, but a new community separate from evil, corporate New York that represents a new way of living to the world. It is this permanency, the act of taking over a public space for an endless Teach-In, that has fascinated the liberal mind....

This is Burning Man in New York. By entering the protest space you renounce the protection of and slavery to the police and the banks, and enter an agreement that you are going to build a community where everyone is equal and will avoid any problems of the old, evil world by being nice and respecting each other. ...

This cult mentality allows them to blind themselves to what the protest is really like...

Only with this background can the jaw-dropping record of crime at occupations around the country over the past few weeks can be believed, although not totally understood. How many sexual assaults and rapes were there at the Greensboro sit-ins? How many police cars were defecated upon at Selma?...

That this idea did not fall apart immediately is thanks to some clever quirks about the way it is marketed. First, because the protests are held in cities where participants can easily go to and from their homes and jobs, maintaining the protest is more of a hobby than a commitment... If you get burned out you can walk away at any time without losing much. ... due to the culture of leftist protests, any police crackdown will only renew support for the occupation.

But cracks are starting to show in this structure. Everyone is allowed to choose the job they want to do, which naturally leads to stifling bureaucracy from overcrowded committees and out-of-control kids who just want to do their thing.  Money is bound to dry up as long as the occupiers are not producing anything of value themselves...

Perhaps it should be disbanded before things get too bad... To be “successful”, as they are now, the protesters must try to maintain their little society indefinitely. And that spells ruin.

The problem is not in the way the protest is being run; it’s in the entire concept of the protest. What is the good about the masses whose interests they are trying to promote? Why do the 1% lack this goodness? As Irving Babbit wrote in Ideas and the World, “The democratic idealist is prone to make light of the whole question of standards and leadership because of his unbounded faith in the plain people.” The 99% are the people, and are thus inherently good; the 1%, on the other hand, has not just been bad recently, but is inherently untrustworthy because it is such a small minority. If 99% of the mob before Pilate wanted to crucify Christ, these protesters would have no choice but to approve. They are unable to choose any particular strain of American culture over the other, even if one kind is dangerous to civil society, and another is the foundation of society itself.

To be allowed to join the camp of Occupy, the only creed you need affirm is political. The scholar Claes G. Ryn has recently observed that in modern American intellectual life, ”issues of cultural decline are discussed as if the key to reversing the trend lay in the hands of politicians.” The reality is always, without exception, the inverse. The way people conduct themselves and interact with each other determines what they can achieve together.  Culture dictates politics, and a culture that believes otherwise is going insane. The failure of Occupy Wall Street is not in its political goals, but in the culture its structure inherently creates. Notice the utter chaos of their art and architecture, theformless, artless madness of the crowd. It could only have been dreamt up in a society that believes politics can come first and culture afterwards, and without understanding how either of these things arise...

"The average CEO made $9.6 million in 2011, even as workers’ wages remained stagnant and unemployment hovered nationally around 8 percent.” ... “As the AP noted, ‘the typical American worker would have to labor for 244 years to make what the typical boss of a big public company makes in one.’"

“Today, Twitter asked a judge to quash a subpoena requesting three months of public tweets and account information belonging to Occupy Wall Street protester Malcolm Harris. The 23-year-old was charged with disorderly conduct last December, when he, along with more than 700 other Occupy Wall Street protesters, blocked the Brooklyn Bridge during a march. (You'll also remember Harris as the guy who spread false rumors that Radiohead was playing down at Zuccotti Park.) In February, the Manhattan District Attorney's office faxed the subpoena to Twitter HQ. Prosecutors have said they want Harris' old tweets to counter his "anticipated defense"—that he had been led onto the bridge by NYPD officers.”
....
“Harris' case is about just how much control we have over our privacy as our online lives take place increasingly on third-party platforms like Twitter. Harris may have posted his tweets publicly at first, but he deleted many of them soon after the bridge incident. Imagine if Harris had posted his tweets on pieces of paper tacked to a physical bulletin board, then took them down and hid them in his house. The DA couldn't just barge in without a warrant because they suspected he'd once posted incriminating messages to the board. It should be the same for his deleted tweets, even if they live on Twitter's server. Our ability to hide what was once public is just as important to privacy as controlling what's private in the first place.

This gets at a bigger problem: the law and technology companies are currently incapable of dealing with any concept of privacy online that goes beyond the simple dichotomy of public vs. private. (Some are trying.) If you don't engage confusing, often-useless privacy controls, your only choice is to act in front of the entire internet, and leave a record forever.”

The Occupy Movement Is Launching A Money Cooperative

“In an ironic twist, the Occupy Wall Street movement, which, two years ago, galvanized resentment against Wall Street and gave birth to the phrase “the 99%,” has given birth to something new: a financial institution.

Or, as they call it — the Occupy Money Cooperative.
“We launched [the Occupy Money Cooperative] because we felt that the way the for-profit banking industry operates in the U.S., it intrinsically exposes the U.S. economy to risk and makes us vulnerable to the consequences but, above all, fails many millions of Americans who don’t have bank accounts and are denied banking services,” founder and director Carne Ross, of the non-profit advisory group Independent Diplomat, said.
He said the Occupy Money Cooperative, which was created by a small group of volunteers who met in Zucotti Park two years ago, will provide access to financial services, particularly to  those who are denied them by the for-profit banks.

On the site, the cooperative pledges that it:
“Will offer access to low cost, transparent, high quality financial services to everyone.
“Will actively and directly encourage the development of innovative financial services that will foster financial inclusion, and lead the field in terms of openness and fairness.
“Will lead by example to affect a positive change for our members and stakeholders, and provide an uplifted standard of conduct for the financial community.
“Will actively work with business partners and organizations that demonstrate a commitment to the well-being of their communities.”
Like a credit union, the cooperative will be owned and controlled by its members.”

Occupy: one year after

"The Occupy movement demonstrates that with social media, a small group of influencers can generate and spread an idea that reaches thousands of people, who in turn amplify the idea to millions of others. Klout aims to be a tool for measuring influence."
Powered by